Too many marriages are annulled in rage & emotions. It is amazing how time can heal and restore mutual affection. Perseverance is magic.
Shaykh Sulaiman Moola

Email ThisBlogThis!Share to TwitterShare to FacebookShare to Pinterest
Labels: Quotes

The next time you insult someone, remember that Allah may put you in a more demeaning situation. Fear Allah.
Maulana Yunus Palanpuri

Email ThisBlogThis!Share to TwitterShare to FacebookShare to Pinterest
Labels: Quotes 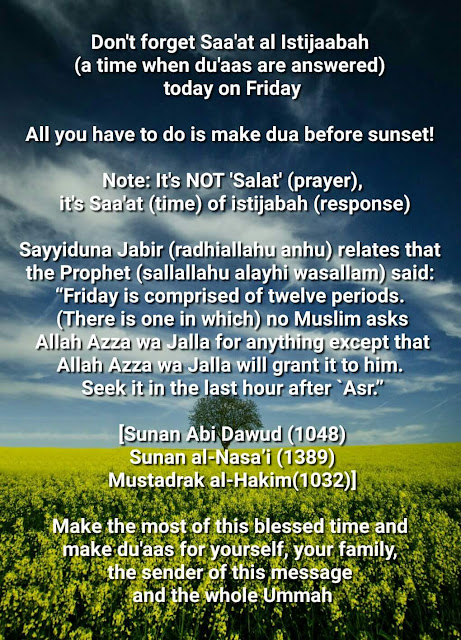 Email ThisBlogThis!Share to TwitterShare to FacebookShare to Pinterest
Labels: Dua

I was listening to the radio this morning. There was a discussion going on about the Shia cleric killed in Saudi Arabia.

One point I noted was that there was so much sympathy with this terrorist who was a Saudi national, who had disturbed the peace of the country and who was committing treason by attempting to topple the government. He was 1 of 47 who were convicted of terrorism, the rest were Sunni. The punishment in Saudi Arabia for terrorism is death, whether one agrees with it or not.

Also, Iran is crying for this one person while it has never said a single word for the millions of Syrians killed unjustly and the interference and turmoil they have created in Iraq post Saddam.

Secondly, Iran hangs Sunnis on a regular basis. In 2015 alone, they murdered more than 1000 Sunnis by hanging them in public. Many of them were Sunni clerics. Not to mention the other forms of persecution people face in that country.

Then the discussion moved on to whether the Sunnis think Shias are Muslims or not. The Sunni brother explained that it depends on what their beliefs are. The Alavees believe that Ali was God, so they are not Muslims, but those who don't hold such beliefs are Muslims.

What they failed to discuss was the Shia's belief regarding the Sunnis. Shias believe that all Sunnis are non Muslims. They even slander the companions of the prophet peace be upon him. They claim that they were all apostates. They believe that killing Sunnies elevates the ranks of Shia in paradise. Their leaders claim that Killing Sunnies holds more reward than killing any other non Muslim.

Shia books state that when the hidden Mahdi will arrive, (na'oodhu billah) he will take out Sayyiduna Abu Bakr and Sayyiduna Umar (radhiallahu anhuma) out of their graves and crucify them. These are just some of their disgusting beliefs towards the great Sahaba, whereas Sunnis love all the Sahaba including Sayyiduna Ali, Sayyida Fatima, Sayyiduna Hasan, Sayyiduna Husain and the rest of the Ahlul-Bayt.

Shias form only 10% of the world Muslim population. Yet they are causing so much corruption around the world.

May Allah have mercy on the Ahlus-sunnah and protect them throughout the world. Ameen.

Permission to distribute any written material from this blog is given, but the original source & this blog URL MUST be quoted. Remember, Allah is All Seeing!
If you have found this blog of benefit then please help push Islamic Education/ Awareness online by placing a link to here on your site & sharing this link with others.Jazakallah